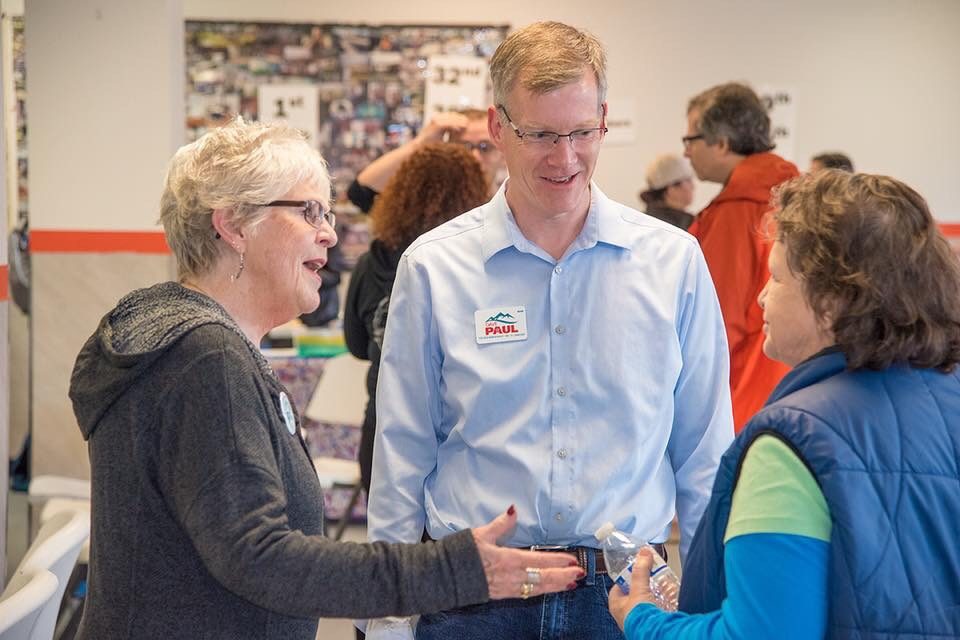 Dave Paul, the Vice President of Institutional Planning and Effectiveness (IPE) at Skagit Valley College announced Mid-March of 2018 that he is seeking election to the Washington State House of Representatives. The seat which he is running for is in the 10th Legislative District which includes parts of Mount Vernon, parts of Snohomish County and all of Island County. Mr. Paul is running against incumbent Representative Dave Hayes, a Republican. Mr. Paul, a Democrat, has said that his agenda, if elected, would greatly concern education, the environment, and gun control.

As the VP of the IPE office of Skagit Valley College, Mr. Paul is responsible for the big picture goals and operations of the college. Most recently he oversaw the accreditation process and has worked across departments to organize and execute the College long term goals. He decided to seek Public Office after many years of encouraging others to get involved in the political process. As this next election began to approach however Mr. Paul said that he looked at the current legislative delegation of the 10th felt that it did not represent the values of his neighbors and friends.

Then in January he says, I thought we should have some choice in elections and started looking at maybe I should run myself. I love the district, I love living in this corner of our state, I grew up in WA state and think that our voters deserve a voice in Olympia that I don’t think is being represented right now.͟

And so, he threw his hat into the ring.

As a lifelong educator Mr. Paul said that he thinks that the district deserves some one who fully supports fully funding our education system.͟ Referring there to the McCleary decision, which ruled that the State legislature has failed in its constitutional mandate to fully fund public education. I would not have wasted however long it took them to find a solution, there was a lot of political footballing on that and in the end to have come up with a plan to fully fund that they came up with an approach that I disagree with to tax property.͟ Rather Mr. Paul believes that the legislature should work to fund education by closing business and tax loopholes which are just ridiculous in this day and age͟ such as an oil extraction loophole.

Mr. Paul claims that he has a greater concern of the environment than͟ his opponent and that Climate Change should be addressed immediately. Mr. Paul also noted that he would have supported a controversial carbon tax bill which had been in the Legislature during this last session but did worry that had it passed it may have caused problems for poorer Washingtonians.

Mr. Paul also attacked his opponent Rep. Hayes for ways which he believes reflect a disconnect between the 10th district delegation and their constituents. Rep. Hayes voted against the banning of bump stocks as well as the banning of conversion therapy. My friends and neighbors don’t support that.

The Cardinal reached out to Representative Hayes for comment but did not receive any by the time of publishing.
Speaking further on gun control Mr. Paul said that he believes that his opponent doesn’t support common sense gun safety measures,͟ and that he believes the Alliance for Gun Safety has proposed a number of measures which he supports such as universal background checks and raising the minimum age to purchase an assault weapon to 21, claiming that currently it is easier to buy an assault weapon than a handgun.

The classification for assault style weapon is not very strongly agreed upon by lobbyists, media analysts, or manufacture and when asked then for clarification as to what exactly he meant by͞assault weapon͟ Mr. Paul said that what he means by assault weapon is a semi-automatic rifles that include military features intended to enhance the firearms’ ability to kill.

The job of a legislator is part time but takes the seat holder away from their full-time year-round job for several months out of the year. During budget sessions the legislature meets for 105 days out of the year. During off years the legislature meets for 60 days. In recent years however, budget sessions have grown increasingly long as budget funding and size have attracted more and more controversy in Olympia. The session of 2017 was one of the longest in State history and went into the middle of the Summer with multiple special session extensions. As sessions grow longer and longer, the time and ability which legislators are able to focus on their other year-round jobs lessens. Several students were asked their thoughts on the potential conflict of time between Mr. Paul’s current job at SVC and his potential job in Olympia. Elizabeth Kesterson said,͞I do not know Dave Paul personally, but I am sure that I would be able to notice if he is unable to fulfill his duties͟ and isn’t concerned. Keith Templetor, a three-year student who is in the middle of a break but hopes to return next fall said he believes that Mr. Paul is the most qualified to speak to his own abilities and that if he does not feel that he is stretching himself to thin then there should not be an issue. Christine Taft, a third quarter student at SVC said, it seems like it would be really hard to manage both.

The Cardinal reached out to a member of student Government, but they declined to comment.