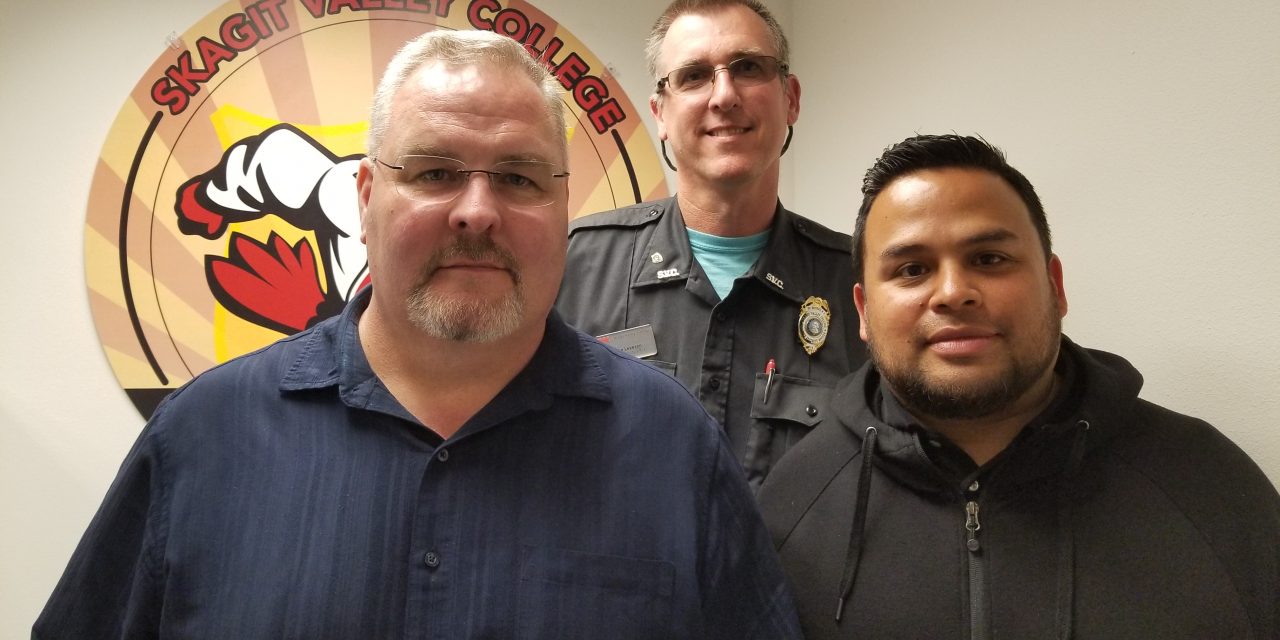 Coming from a very diverse range of backgrounds, careers, and experiences, the three full-time campus security officers (CSOs) at SVC are instrumental in ensuring that there is a high level of safety and security for all who set foot on school grounds. Under the direction of SVC’s Director of Security and Emergency Management, Jim Jolly; officers Rodrigo Valdes, Lance Leveson, and Jim Hoffman work as a highly effective team.

“These three individuals are the very core of the SVC Security Department and are on the front lines daily keeping our campus safe and accessible to everyone,” stated Jolly.

Their tasks are varied, keeping campus safe and orderly by responding to calls, providing access, and enforcing parking. There’s always something new, which keeps them on their toes. Often under-recognized and under-appreciated for all of the hard work that they do, it is really important to highlight the diverse backgrounds and experiences that these individuals bring to campus.

CSO Rodrigo Valdes enjoys “helping people, giving them a true sense of security.” A 2007 grad of the SVC Parks Law Enforcement Academy and also of Western Washington University with a Bachelor’s degree in Political Science, Valdes started as an intern for Bill Overby, SVC director of Public Safety Academies. After spending more time with Overby and the SVC Security Department, his internship bloomed into a job as a campus security guard.

He takes his job very seriously while also maintaining a calm and approachable demeanor. Valdes upholds that one of the most important aspects of successful campus security is just that: approachability. He truly delights in the interactions that he is able to make with students, staff, and everyone else at school.

A typical day starts around 6:30 am, when security officers of the early shift begin unlocking buildings on campus. A quick morning debrief is completed with the previous shift to talk about anything that may have happened overnight. CSOs main focus is on proactively securing campus, but they respond to calls and other service requests throughout the day.

After patrolling during the night shift for a period of his career at SVC, Valdes has many spooky experiences to tell of. However, one of his most memorable stories has a generally good outcome.

“One night I was on patrol heading south along the ball field trail, and I saw this giant plume of fire […] I thought McIntyre Hall was on fire!” Rushing toward the other side of campus to assess the situation, he quickly realized that the building was alright, a relief.

Unfortunately, this was the apartment complex fire that displaced 200 people and injured 4 back in July of 2014. As one of the few on campus in the middle of the night, Valdes took charge of the situation. The college has an agreement with the Red Cross to provide emergency shelter. He helped to roll out mats and prep the gym to accommodate many displaced residents. This effort was successful in keeping dozens of families off of the street.

Lance Leveson, CSO and Chair of the District Safety Committee, started his career at SVC in 1990 as part-time security guard and student. In 2003, he became full-time. In 2012, he became an official Campus Security Officer. He also enjoys the valuable interactions made with people on campus.

“I get paid to break into vehicles… I mean who wouldn’t like to bail out a member of the Police Department who locked their keys in their vehicle?” joked Leveson. He enjoys building friendships with those he meets as they make progress towards their dreams and aspirations.

Leveson also prides himself in being a “fair, honest, trustworthy, ethical, helpful, and unbiased” CSO. Leading by example, he works hard and accepts only the highest standards so that he can confidently walk away at the end of his shift knowing he has finished a “job well done.”

Jim (James) Hoffman, worked a nearly 20-year law enforcement career before retiring and opening a small business. About a year ago, Hoffman became a Campus Security Officer at SVC. He enjoys it because it encompasses many of the positive attributes of being a police officer, without some of the less enjoyable aspects that come with the territory.

SVC provides a positive environment that allows Hoffman to focus on “service to people.” He articulates on the challenges faced in this position:

“I feel like we in security face two challenges.  First, getting the word out that we do a lot more that write parking tickets. Second, it is often challenging to balance the safety and security of this campus while still making it an open and welcoming campus focusing on Access, Achievement, and Community.   The purest form of safety and security can be counter intuitive to the goals of equity if done wrong. But I am proud of the skill that this department has to make both safety and inclusion work together.”

Hoffman also pointed out that many of the numerous training and in-service opportunities are aimed at addressing these difficulties. “All of us here in security are here to help,” he mentions, addressing the importance of community-oriented policing, based on personally developing rapport with those that the team serves on and around SVC.

Jolly also noted that this team has been essential to developing many campus safety policies, standards, and training procedures. In fact, the SVC Security General Orders guidebook put together and updated by them will hopefully be presented as an exemplary template to colleges statewide at the Safety, Security, & Emergency Managers Council (SSEMC). This council represents key figures in campus safety from 34 of Washington’s Community and Technical Colleges.

Because these officers work behind the scenes in all that they do, take a moment to appreciate their contributions to this college’s safe and upbeat atmosphere.