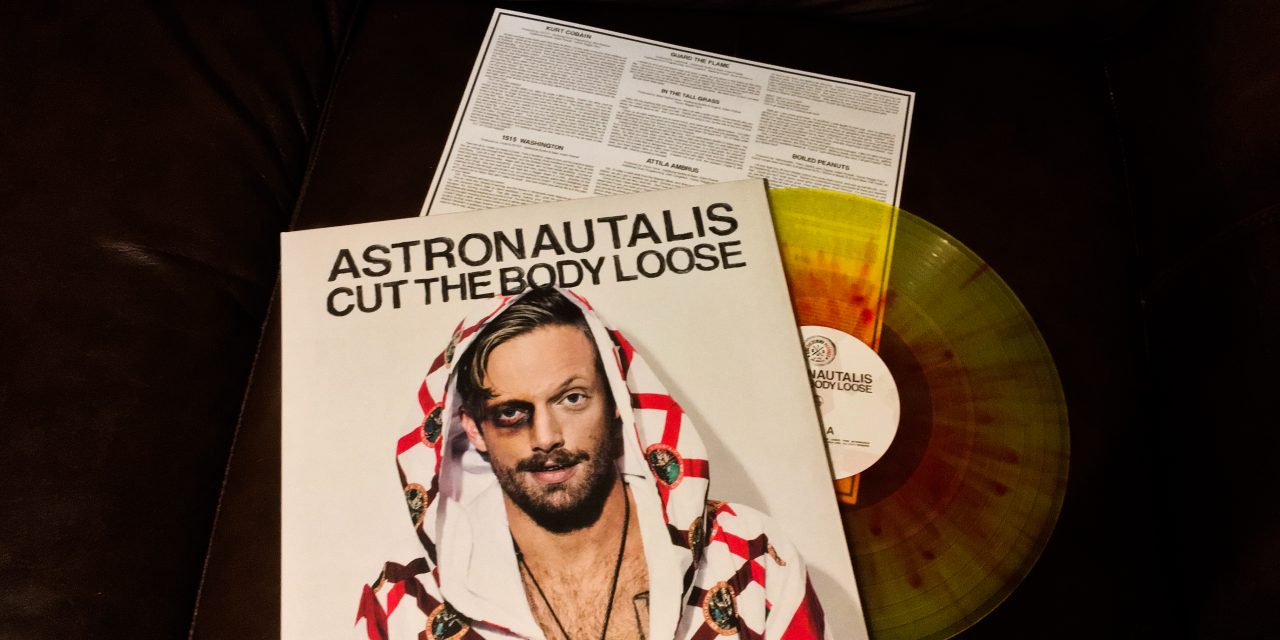 From the personal collection of the writer, the colored vinyl album in question.

Astronautolis’s third and latest album, Cut The Body Loose, has been playing on repeat on my phone for about a month.  It’s relatively short, but with a surprisingly wide variety of tracks bringing a lot of emotions, feelings and experiences to life on top of beats just as varied, including guitar and horns to a more stander produced sound.  I was first introduced to the artist less then a year ago, and when I saw him live in Portland this past January, I was enthralled.  Having since listened to both his older work and his newer material, I have fallen in love with the progression and changes leading to his latest album.  In the past, Astronautolis, born Andy Bothwell, has mixed styles and genres, hip hop, rap, singer songwriter, indie rock, punk, talking blues, paying homage to his influences from across the music and artistic spectrum.  While Cut The Body Loose is decidedly a rap album, these different strains can still be felt strongly weaving themselves throughout.  Track “Atilla Ambrus” a bluesy guitar can be heard in the last half of the song, “Forest Fire” seems to be a narrative lament of lost or fading love, standing out in the album for with a subdued tone, “Running away from God” holding fast to tenants of punk rock.  This intermingling of genre is something that to me makes the album feel unique, it is rap, but it is rap strained through different musical times, places, and shows the artists progression as well as personality and belief stronger then it may otherwise be.  Any Bothwell said in an AV Club interview on the album, headlined, “Astronautolis On How Rapper Need To Kill Their Idols” he speaks to his influences for the album, and his writing process.  Saying that he usually writes academically, sets out to write straightforward, starting and ending somewhere and creating in a linear fashion, and then discusses the differences for this album.  Inspired by a poem, he says he wrote the songs each as independent but whole pieces, that can be looked at singly but also are threaded together by theme and purpose.  That same theory is applied to the song structure themselves he continues, most of the songs verses building on the last in a referential or structural way.  In the end, you get this matrix of feelings and intentions that pull the whole work tightly together, while allowing each song to sing individually on any listen.  The first three quarters of the album seems to be a very raw evaluation, or reevaluation of a life, values, belief systems, the coming to terms with changes and changes to come.  Some songs burst with regret, with anger or resentment, disappointment.  Then, at Cut The Body Loose, a reference to a New Orleans funeral tradition in which a mourning procession becomes a party after the body is “cut loose” to the graveyard, the album changes.  The song takes the place of acceptance of all the feeling expressed before it, acknowledging it and embracing it. The last two songs, are as described by the artist, a straight party song, “SIKE” and a love song, “Boiled Peanuts.”  If you’re looking for something good this summer, an album for some deep contemplation or to turn up in the car, look for Cut The Body Loose by Astronautolis.  More info can be found at astronautolis.com, and the album can be found in iTunes or on SoundCloud.