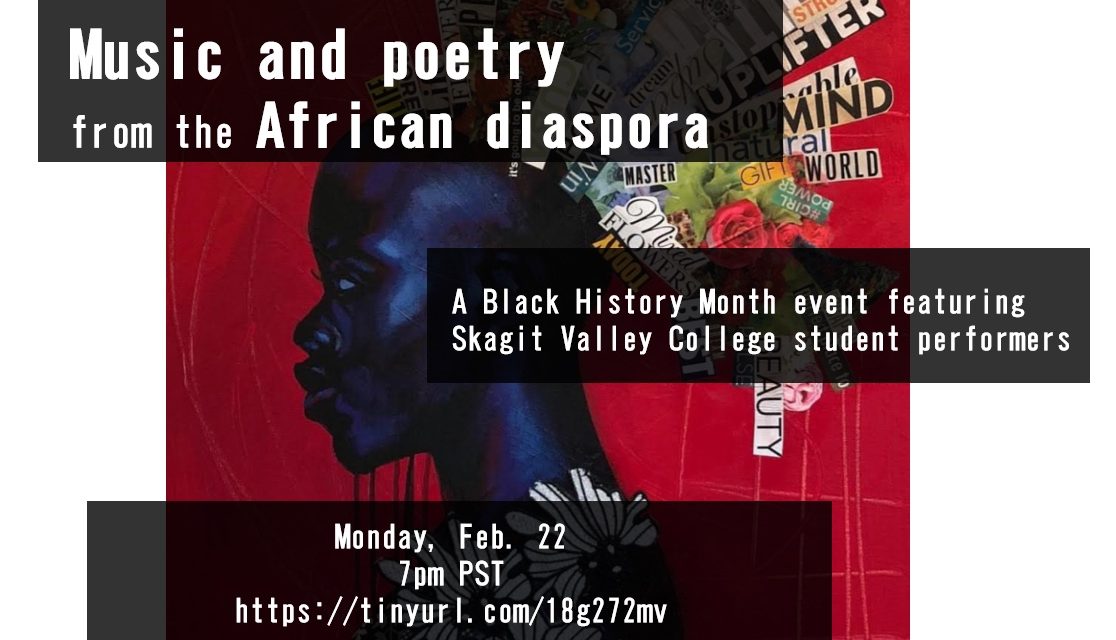 Black Student Union in partnership with the Key of Joy hosted Music and Poetry from the
African Diaspora via Zoom on February 22, 2021, in honor of Black History Month. This virtual
hangout was attended by dozens of SVC students, faculty, and staff.

The event opened with a poem recited by SVC student Mia Anderson titled “Dark and Lovely
After Take-Off (A Future)” by Yona Harvey. In a clear voice, she recited the abstract yet
poignant words aloud, “Nobody straightens their hair anymore, Space trips and limited air
supplies will get you conscious quick.”

Anderson shared her reason for choosing this piece saying, “The name of it references a line of
hair care products that are utilized to lessen our curl patterns to make them more “manageable”
and that’s an experience that I had… utilizing those products to cater towards the white gaze, to
seem neater and more put together, rejecting my own natural hair.” Anderson recently started her
own dreadlock journey, embracing her natural curls.

BSU adviser and communications instructor Angela Logan appeared on the screen next saying,
“The poetry is deep, so it takes a second to just let it sit with your spirit. Poetry can be very
abstract, and it resonates with everyone differently. I think that’s one of the most beautiful things
about art is that it articulates things that you don’t have the words for in a conversation or
dialogue between friends, in a classroom, or at work.”

Next up was Kourtney Wright performing an original poem titled “Welfare Queen.” Wright’s
words paint an uncomfortable truth, “Struggling to breathe, People can’t see the tears she cries at
night for her babies, For herself. “You did this to yourself.” Screaming the words shattered
glass…. I find it odd that struggling mothers are seen as an adversary. It’s odd how the self-righteous attack.” As Wrights’s poem ended words come through the zoom chat…Amazing! Powerful!

When asked how she decided on which poems to perform Wright said, “I chose to recite “CoDependency” and “Welfare Queen” because those poems had the words, I needed to speak the
most. Particularly “Welfare Queen.” She went on to share her inspiration for writing the poem
saying, “I have always been aware of the horrible stereotypes surrounding single mothers,
especially single parents of color. I find these stereotypes to be upsetting and unjust.”

This was the first time Wright performed for such a large crowd and she confided that she had
pre-performance jitters saying, “I was extremely nervous…My thoughts and heart were racing. I
was so excited.” When asked how she feels now that the event is over, she said, “Honestly, I feel
empowered. I shared a little bit of my soul with people, and I was met with love and acceptance.
The entire event was a transcendent experience.”

Once again, Logan came onto the screen sharing that this poetry was from a woman’s
perspective saying, “oftentimes in movements, it’s men who are placed in front. Very seldom do we see the women that are often behind them. Pushing the men forward with each step. You
know Martin Luther King Jr. you know Malcolm X, but how about Angela Davis, Stacy Abrams,
Kamala… it’s time to celebrate black women’s voices.”

SVC student Mira Arcilla took the virtual stage in front of her keyboard belting out the Bob
Marley classic, “No Woman, No Cry” with the energy and passion of a seasoned performer.
Arcilla, a lifelong musician and singer, was voted the number one vocalist in the US and Canada
in 1991 by the jazz and blues periodical DownBeat Magazine.

She shared her love-hate relationship with the music profession over the years saying,
“sometimes people expect more from you than you can give, and you are so stressed out…now
I’m kind of retired in that realm and I just do it for fun and helping others” Her latest project is
“The Key of Joy” where she plays piano, sings, and shares the comfort of a motherly hum over
Zoom every other Monday night.

Anderson was up again reciting the recently penned piece by Evie Shockley, “Women’s Voting
Rights at 100 (but Who’s Counting),” “Eenie meenie minie moe, catch a voter by her toe, if she
hollers then you’ll know, got yourself a real Jane Crow.”

Like many voters in 2020, Mia was disheartened by the selection of candidates seeing them as
self-serving capitalists but found inspiration from reading Malcolm X’s 1964 speech “The Battle
or the Bullet.” The words that were spoken 57 years ago still ring true when Malcolm X says,
“Every time there’s an election the races are so close that they have to recount…this means that
when White people are evenly divided, and Black people have a bloc of votes of their own, it is
left up to them to determine who’s going to sit in the White House or who’s going to be in the
doghouse.”

The speech states that as a Black person you can either vote or revolt but as Anderson shared, “a
revolution can’t be created by one person, it’s going to take a legion of people to say hey, look
we are all committing to these ideas and we are going to apply them through action. And on
November 3rd I didn’t have a legion of people that I could get with to see the changes I wanted…
so I voted.”

Logan takes the screen saying, “This last poem is dedicated to our Black brothers all over the
world.” It was written by Claudia Rankine on February 26, 2012, in memory of Treyvon Martin.
Logan begins, “My brothers are notorious, they have not been to prison, they have been
imprisoned…the hearts of my brothers are broken.” The Zoom audience stays riveted to the
screen as Logan’s performance crescendos to an emotional end with the words, “Brother my
brother… I say goodbye before anyone can hang up, don’t hang up, wait with me, wait with me
though the waiting might be the call of goodbyes.” The audience was visibly moved with people
wiping away tears.

Arcilla takes the screen for the last performance of the night comforting the crowd with the
uplifting song “O-o-h Child” by the Five Stairsteps. She sings, “O-o-h child, things are gonna get
easier, o-oh child, things’ll get brighter… someday, yeah, we’ll walk in the rays of a beautiful
sun, someday, when the world is much brighter!”

After the last key was struck the virtual crowd went wild with jazz hands, applause and praises.
Performances by talented students like this make the world a brighter place so, if you would like
to experience the Key of Joy with Mira Arcilla she can be reached at [email protected] and
for more information on BSU meeting times please contact Angela Logan at
[email protected]