A Labor Strike in Berkley 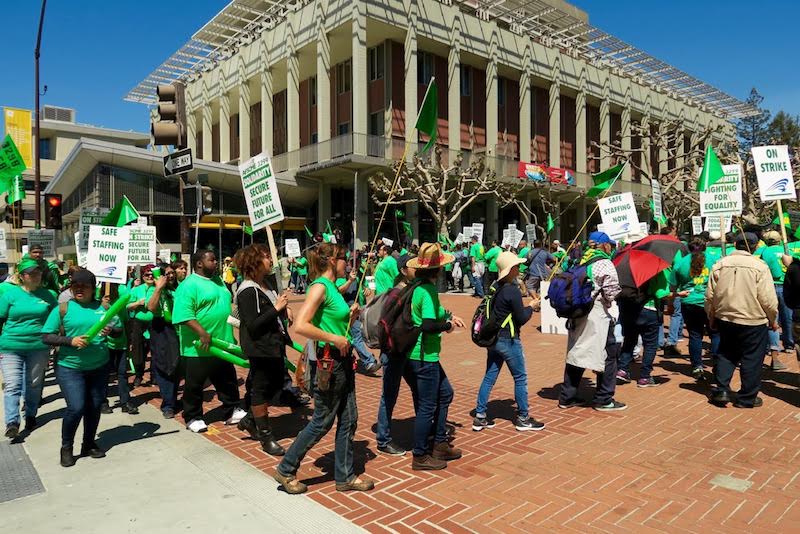 Photo by Ted Friedman of the Berkelyside

Several weeks ago, I had to fly down to California to visit quickly family.  While I was down there, I decided to take the short time I had and see what I could of San Francisco and Berkeley, places with a rich cultural history that deserve a longer exploration then I was able to give them.  I had never been before, and with a day for each I chose two places bound to be packed with interesting people places and things to do.  I took a train to downtown San Francisco and walked Haight street and golden gate park, and the next day, got up early and headed for breakfast in Berkeley.  The second day, and also the last, I would fly out that evening, would be spent in and around the campus of UC Berkeley.  An area surprisingly subdued for its reputation, at least as known to me, it was full of coffee shops, empty restaurants catering to the quick eater, and high end and low-end bookstores and thrift shops.  The campus was surprisingly empty, few people roaming the walking paths or spending time in the eucalyptus grove.  Walking around, enjoying the heat, I managed to walk right into the middle of a demonstrations.  Pounding drums, yelling voices, megaphoned speakers soapboxing in front of a crowd of people wearing green and waving flags and banners.  Tables had been set up, pamphlets passed, info disseminated into the gathering crowd of strikers and onlookers come to watch and learn.  With a mash up of slogans and attitudes, it took awhile to understand the aim of the gathering.  T-shirts emblazoned with slogans on the right to work, the right to be heard and the right to representation.  From people freely discussing the topic with anyone willing to ask, and the later quick google revealed it was the Local 3299 of the American Federation of State, County and Municipal Employees.  They where walking out of work for three days on all campuses across California, to reinforce a contract negotiation, and to address racial and gender differences in hiring and pay.  A man I spoke to in the crowd told me that they (the college) where cutting pay, and benefits.  Making it hard to make living, restricting the lives of the janitorial, municipal workers, and medical staff. The college brought in unaffiliated workers to cover the strike, but it made its point.  In an area long known for political action, the process is still alive and well as I was able to witness firsthand.